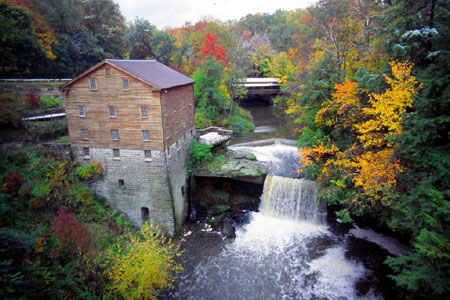 At the end of the 18th century the land surrounding a beautiful, natural waterfall, now known as Lanterman's Falls, belonged to John Young, founder of Youngstown. In August 1797 Young's surveyors, Isaac Powers and Phineas Hill, set out to explore the then

At the end of the 18th century the land surrounding a beautiful, natural waterfall, now known as Lanterman's Falls, belonged to John Young, founder of Youngstown. In August 1797 Young's surveyors, Isaac Powers and Phineas Hill, set out to explore the then unnamed Mill Creek.

Coming upon the Falls, the two men immediately recognized the potential of the site for a mill. Hill offered to purchase the 300 acres surrounding the Falls. Young stipulated, as a condition of the sale, that Hill must build a saw- and gristmill on the site within eighteen months of the purchase. Hill agreed and contracted with fellow explorer Isaac Powers to construct the mill.

The first mill was built of logs from the site. Millstones were cut from granite boulders found in the area of what is now Fifth Avenue at Rayen Avenue. This mill operated from 1799 to 1822.

In 1823 the original mill was replaced by a second mill. Built by Eli Baldwin, this frame structure served only as a gristmill. Baldwin's mill operated until 1843 when a flood washed it away. A grinding stone from this mill can still be seen resting in the creekbed 500 feet downstream of the Falls.

The current frame structure was built in 1845-46 by German Lanterman and his brother-in-law Samuel Kimberly. German and his wife Sally Ann owned a large tract of land around the Falls. Lanterman's Mill was the third mill constructed at the Falls and was used solely as a gristmill. It is believed that this mill was originally powered by an overshot wheel, the type presently being used, but was later converted to turbines prior to its closing in 1888. Lanterman's Mill was a highly successful operation, utilizing three sets of grinding stones. Historians speculate that its downfall was due to the advent of roller mills which were much more efficient and less costly to run.

After closing, the Mill stood in a state of disrepair until purchased by the Park in 1892. As an early Park facility, the building held a ballroom, a concession stand, and bathhouse for swimmers. Swimming continued in the Pool of Shadows until 1917. The upper floors were used for boat storage during the winter.

In 1933 the first floor was converted into a nature museum, then into the Park's historical museum in 1972. Lanterman's Mill was entered in the National Register of Historic Places by the United States Department of the Interior in 1976.

During the years that the Mill served as a nature museum, generations of area residents spent countless hours viewing the hundreds of mounted birds, mammals, and other natural history exhibits. Thousands of civic and school groups toured the Mill, while captivated Park visitors made it the subject of poems, songs, photographs, and paintings.

The renovation of Lanterman's Mill was no small feat. Many obstacles had to be overcome during the costly and painstaking renovation which began in 1982.

Historical records and original blueprints depicting the operation of Lanterman's Mill were nonexistent. An archeological dig was organized by Dr. John White, professor of anthropology at Youngstown State University, yielding valuable artifacts and the location of the original raceway, proving the existence of an earlier water wheel.

As research continued, the Park searched for an expert gristmill renovator to tackle the complicated project. Lorin Cameron and his sons from Damascus, Ohio, were commissioned after the Park learned of their superior restorations of Gaston's Mill in Beaver Creek State Park and Garretts Mill in Garrettsville, Ohio.

With research and expert talents in hand the Park now only lacked funding for the project. The Florence and Ward Beecher Foundations made the restoration a reality with a $600,000 grant to the Mill Creek Park Foundation. The work could now begin.

Work commenced in the Camerons' Damascus workshop. Although much of the needed antique machinery was purchased, the Camerons had to craft by hand many of the fittings, elevator shafts, and housings--not to mention the massive four-ton water wheel.

While the Camerons worked on the machinery, the mill underwent a complete structural facelift. Footers and beams were replaced; connections were reinforced; a new roof was installed; and new windows, doors, and siding completed the transformation. Now the Camerons could transport the components of the inner workings to the mill. The wheel, marked piece by piece and disassembled, was rebuilt in its present location.

Exterior improvements included a new observation deck and walkways. An additional course was placed upon the existing log dam, ensuring an adequate supply of water to the Mill. More than a century after its closing, Lanterman's Mill runs again. Cross the Mill's threshold, and transport yourself into a bygone era, rich with the remarkable legacy of early settlers.

Our visit was to learn more about the legends and spirits that supposedly still haunt this location. Our tour guide was very knowledgeable and animated about the stories. We were told about the worker in period clothing that continues to work in the basement area. We were also informed about the woman who has been seen looking in the windows. Supposedly, she worked at the mill when her fiancé` left for the civil war. Upon waiting for his safe return, she watched as a soldier came across the bridge with news for her. Her fiancé` would not be returning. He died at war. Some wonder if the face etched into the wood panel could be hers. It simply just appeared one night.