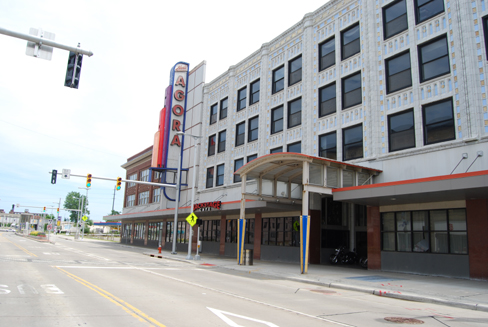 Henry LoConti Sr. opened the first Agora on February 27, 1966 near the campus of Case Western Reserve University in Cleveland. His concept of promoting live entertainment for young adults was an instant success, and audiences outgrew both the building and

Henry LoConti Sr. opened the first Agora on February 27, 1966 near the campus of Case Western Reserve University in Cleveland. His concept of promoting live entertainment for young adults was an instant success, and audiences outgrew both the building and the neighborhood almost immediately.

The following year, a new Agora opened its doors adjacent to the Cleveland State University campus. Henry never imagined that the club would evolve into a major force in the international concert scene and become the premiere Ohio concert venue.

In the years that followed, the Agora (which at one point encompassed a chain of thirteen clubs nationwide), played a major role in developing the music and entertainment industry in Cleveland and the nation by booking thousands of local, national and international groups to perform on Agora stages. The concept of showcasing new and well-established artists confirmed the club's leadership within the industry.

The Agora booked its first national act, the Buckinghams, in 1968. For many years "Sundays at the Agora" showcased local original music groups and popular regional bands, which kept the club filled to capacity. The Pack, later known as Grand Funk Railroad, The Outlaws, ZZ Top, Rainbow Canyon , James Gang, Glass Harp, Foghat and The Rasberries all achieved national and international prominence after getting their "big break" playing the Cleveland Agora stage.

In 1968, the Cleveland Agora built the first in-house recording studio, Agency Recording, to produce records, live broadcasts and radio programs in stereo. Many of the Monday night concerts that were recorded became live album releases.

In 1970, the Columbus Agora opened up across from the Ohio State University . That year the Agora teamed up with WNCI-FM radio to produce the first Agora live broadcast featuring Ted Nugent. Not long after, the show was moved to WMMS, establishing what would later be dubbed the WMMS-AGORA marriage by Radio Magazine. In addition to the Agora radio network broadcasts, ABC's "King Biscuit Flower Hour" also ran the Agora's live radio shows nationally.

Throughout the 70's, The Agora expanded into a chain of 1000 seat clubs with outlets in Atlanta, Dallas, Houston, Tampa, Greater Miami, Hartford and New Haven, Connecticut, and Akron, Painesville, Toledo and Youngstown, Ohio. Agora Promotions put on an annual series of outdoor music festivals for over 25 years at Legend Valley (later known as Buckeye Lake Music Center ) near Columbus that would draw as many as 55,000 people.

In 1975, the Agora started another radio program, titled the "New World of Jazz". This show was aired on over 50 stations in the U.S. , Europe, South America, Asia and Australia.

The Agora could be experienced via television sets on Channel 8 in Cleveland in 1978. Onstage at the Agora featured live concerts before MTV gave music lovers their visual fix. This show would eventually air worldwide through syndication.

A fire at The Cleveland Agora on 24 th Street in late 1984 spurred the move to the current location at 5000 Euclid Ave the following year. The Agora officially re-opened their doors in late 1985 and has been going strong ever since. No longer a dance club for college students, the Agora grew to become one of the premiere venues in the country to see new and established acts.

The Agora was voted the number one rock club in the country by Billboard Magazine, and was given the same distinction by author and Rolling Stone editor Dave Marsh in his best seller Book of Lists . The Agora has also received countless awards within the City of Cleveland honoring it as the best place in the city to see a live showť and best rock clubť. But, the Agora is more than a rock club; it is a significant part of music history that will continue the tradition for many years to come.


In February of 2007 we visited the Cleveland Agora Theatre. We have all been there several times for concerts and such and didn't know of the ghostly experiences until last year. We were given a tour and this is what we found. There is said to be a man in a yellow raincoat that haunts the theatre. Employees and attendees claim to have seen this man on several occasions on the balconies and the catwalk. We took photos in both places. The balcony photos showed us nothing. The catwalk photos on the other hand contained "orbs" was is dust or was the man in the yellow raincoat trying to reveal his presence to us? We then went to the basement which holds a lounge and a room where Marilyn Manson used to actually store his stuff. The basement is very chilling and dark. I can't see much relaxing going on in the lounge room. When on the main balcony it seemed that a door locked and unlocked itself but there is no proof of that we heard the sound but didn't actually see anything. An exorcism was performed last year by Psychic Sonya and they say that the supernatural experience has toned down but not completely disappeared.