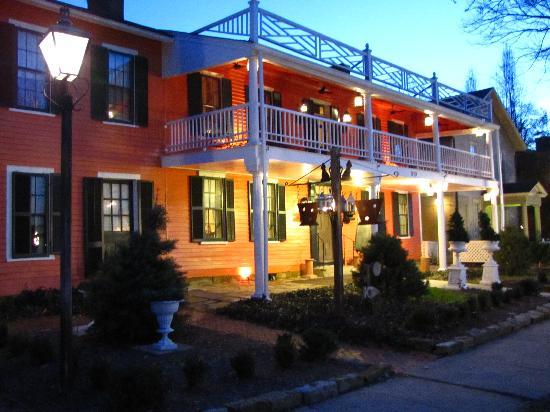 In 1812, Orrin Granger, a pioneer from Granville, Massachusetts built The Tavern on land that was purchased in 1806.

In 1812, Orrin Granger, a pioneer from Granville, Massachusetts built "The Tavern" on land that was purchased in 1806. That tavern, now known as "The Buxton Inn" has been operated continuously since that date in 1812. It was long and typical of the times - early American. It had a ballroom, a stagecoach court, a dining room ...all the fixings demanded by society in 1812.

The Inn operated as Granville's first post office, and as a stagecoach stop on the line between Columbus and Newark. The coach drivers were housed in the original cellar with its hewn beams, stone fireplace, and stone walls.

The cellar today still carries the feeling of those early years when the drivers cooked their meals in the great open fireplace and slept there on beds of straw.

Orrin Granger was a friend and close acquaintance of General (and later President) William H. Harrison who was the first of three presidents and one of many "celebrities" who would patronize the Buxton. An early history book recounts that in a display of cheerful bravado, Harrison rode his horse up the courtyard steps into the Buxton's ballroom where a party was underway.

The tavern thrived and it changed hands in 1818 after Orrin Granger's death. It changed ownership several times over the succeeding years but never closed due to its popularity. The building changed some in the early years. In 1829, an east wing was added and in 1851, a two story wing was added to the building forming a U-shaped building with a center courtyard.

In 1858 or 1859, ownership finally started to stabilize when the inn was purchased by James W. Dilley and renamed "The Dilley House". It remained so until the property was sold to Major Buxton in 1865.

One of the longest periods of ownership that galvanized the inn's reputation for hospitality and gave its current name was that of Major Horton Buxton and his wife. The well-ordered house, the excellent cuisine, the home-like atmosphere, with Major Buxton the quiet attentive landlord and Mrs. Buxton, the cordial and gracious landlady, attracted many guests, especially Denison students, many of whom were patrons of the house during their whole college life. Many returned after college to renew acquaintances, to talk over past experiences, and to attest to the rare charm of the old hostelry.

After retiring from a glamorous career as a light opera singer, Newark-born Bonnie Bounell took over operation of the Buxton Inn. Assisted by Miss Nell Schoeller, she operated the inn in the time-honored tradition of the Buxtons. She even kept a friendly cat named after the previous innkeeper "Major Buxton" who was a favorite of the inn's guests. Nell Schoeller carried on as innkeeper after Mrs. Bounell's death in 1960.

Time and the elements had taken their toll on the structure by the beginning of the 1970's. The Buxton Inn building had fallen on tough times and there was talk of razing the old structure to create parking. Granville preservationist Robbins Hunter discussed the prospect of saving the inn with friends Orville and Audrey Orr. After the Orrs shared their restoration plans with Nell Schoeller, she agreed to sell the inn. The Orrs and their two daughters Melanie and Amy became the keepers of the inn and embarked on a long labor of love to restore the structure to its former glory. Over the years, they purchased adjacent historic buildings to create a one-of-a-kind complex that would make Orrin Granger, Major Buxton, and Bonnie Bounell extremely pleased that the proud tradition and legacy of the Buxton Inn and Tavern is secure and thriving well in the 21st century.

Known as one of the oldest continually operating inns in Ohio, The Buxton Inn was built in 1812 by Orin Granger and served as a post office and stagecoach stop. Stagecoach drivers would often stay in the basement, where they were permitted to cook, eat, and sleep.

In the mid 1800s, Major Buxton, after whom the inn is named, assumed control of the establishment and ran the operation until shortly after the turn of the century. After Major Buxton, Bonnie Bounell was the innkeeper up until the time of her death in the 1960s.

There are several ghosts that are alleged to haunt the Buxton Inn, many of which are former owners or innkeepers. However, strange knockings have been heard in the Inn's basement, where the stagecoach drivers often stayed. The basement door is also known to open and close by itself and there are reports of footsteps heard walking up and down the staircase.

Orin Granger, the original owner, is also said to make appearances at the Inn. He is described as an elderly man wearing old-fashioned white or blue breeches. He has even been accused of stealing pies from the downstairs pantry!

Another of the former owners, Major Buxton, is also reported to have taken up residence at the Inn. His spirit is described as a shadowy figure that is seen throughout the house, although he is most often spotted sitting in the dining room. Although the apparition is shadowy, guests have no trouble recognizing it as Major Buxton, perhaps aided by the large portrait of the Major that hangs in the Inn.

Yet another former owner who has chosen to return is Bonnie Bounell. Her spirit is often referred to as the "Lady in Blue", based on her often appearing wearing a blue dress. Ms. Bounell died in room number nine of the Inn, so it is not surprising that her spirit is seen most often here. However, she is also known to frequent the other areas of the Inn, often preceded by the sweet smell of perfume.

A final ghostly guest is that of a phantom cat. This ghost is often seen wandering the hallways and even entering some of the rooms. And while the true identity of this cat may never be known, it is interesting to note that the large sign hanging outside the Buxton Inn features a large, gray cat.