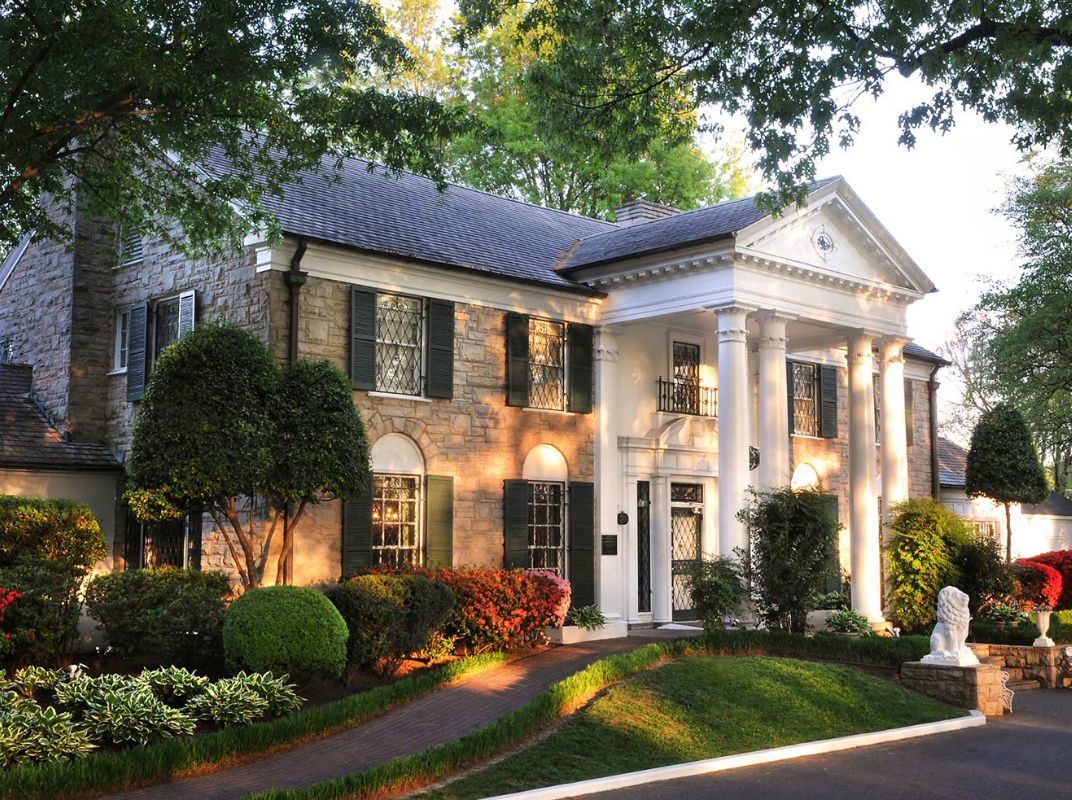 Graceland is located in Memphis, Tennessee, about 10 miles south of the downtown area. It sits along Elvis Presley Boulevard, a section of U.S. Highway 51S which was renamed in 1971 in honor of Presley's residence there.

Graceland is located in Memphis, Tennessee, about 10 miles south of the downtown area. It sits along Elvis Presley Boulevard, a section of U.S. Highway 51S which was renamed in 1971 in honor of Presley's residence there. The land was originally owned by Stephen Toof---the original builder of the house. Mrs. Ruth Brown Moore, Toof's granddaughter sold the property to Presley. The original buildings are now joined by several structures housing museums centered around Presley's life and career, as well as the Heartbreak Hotel and Graceland Crossing, a center for souvenir and memorabilia shops.

Moore inherited the property from her aunt, Grace, after whom the property is named. In 1939, Moore and her husband contracted Memphis architectural firm Furbringer and Erhman to build the two-story classical revival residence and outbuildings. The house was designed specifically with the Moores' daughter, Ruth Marie, in mind. The girl was a musical prodigy and the front rooms of the house were designed to open into one another to serve as a venue for a musical performance.

Driven by increasing fan attention to seek a more secluded and secure place of residence, Presley purchased Graceland in March 1957 as a home for himself, his parents and his paternal grandmother. He paid $102,500, and his family moved into the house in May, though Elvis himself was filming "Jailhouse Rock" and did not spend a night in the house until June.

Presley made many changes to the estate in the 20 years in which he lived at Graceland. Along with many interior decorating changes over the years, Presley built two additions, one on the back east section of the house (this addition would become known as the Jungle Room) and one on the south side. Presley also added a pool, turned the one-story wing on the north end of the house into an apartment, and the built the Meditation Gardens, where he, his parents and his grandmother were all eventually buried.

Open to the Public

Presley died in 1977 and left Graceland to his father Vernon, grandmother Minnie Mae and daughter, Lisa Marie. With the deaths of Vernon and Minnie Mae in 1979 and 1980, respectively, Lisa Marie Presley became the sole heir of the estate. In 1982, Lisa Marie and the trust left in place by Vernon Presley decided to open Graceland to the public. Since then, the estate has gradually purchased the surrounding businesses to create a unified and respectful attraction and tribute.

Graceland was placed on the National Register of Historic Places in 1991, and in 2006 was designated as a National Historic Landmark. Graceland was cited in the National Park Service press release as "one of the five most visited home museums in the United States." More than 600,000 people visit Graceland each year, and it is estimated that the total economic impact on the city of Memphis is around $150 million a year.