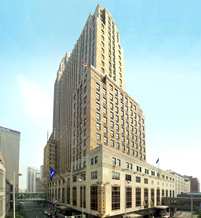 The Hilton Cincinnati Netherland Plaza in Ohio was the first multi-use complex in the United States, making it significant and progressive. The Netherland Plaza was described as a "city within a city".

The Netherland Plaza opened in 1931 to rave reviews by critics. Critics said that the hotel "challenged the splendor of Solomon's Temple" The hotel was a French art deco structure that was state-of the art when it was built.

The hotel had luxurious features including indirect lighting, modern baths, high speed elevators. The hotel was lavish, with Brazilian rosewood, brass, marble, and stylized Egyptian and floral motifs. The Hall of Mirrors is an art-deco treasure.

The Hilton Cincinnati Netherland Plaza in Ohio was the first multi-use complex in the United States, making it significant and progressive. The Netherland Plaza was described as a "city within a city". The innovative complex had a hotel, office tower, automated garage, restaurants and shopping complex.

The main lobby and mezzanine feature a half acre of rare Brazilian rosewood, German silver and Egyptian decor. In addition, there are detailed frescoes, ceiling murals and a Rockwood Fountain with a pair of matching seahorses.

The famous Hall of Mirrors is modeled after the ornate Palace of Versailles in Paris. The Continental Room has floor to ceiling windows and frescoes of the four seasons. The Pavilion Ballroom is th hotel's original big band nightclub.

The "Lady in Green" is said to walk the Hall of Mirrors and Mezzanine level of the Omni Netherland Plaza. Several construction workers have reported seeing the "Lady" during the hotel's 1983 renovation. According to legend, her husband, a hotel laborer, was killed in the construction of the hotel in 1930. His body was never found and his wife, the "Lady in Green," spends her restless nights still searching for him