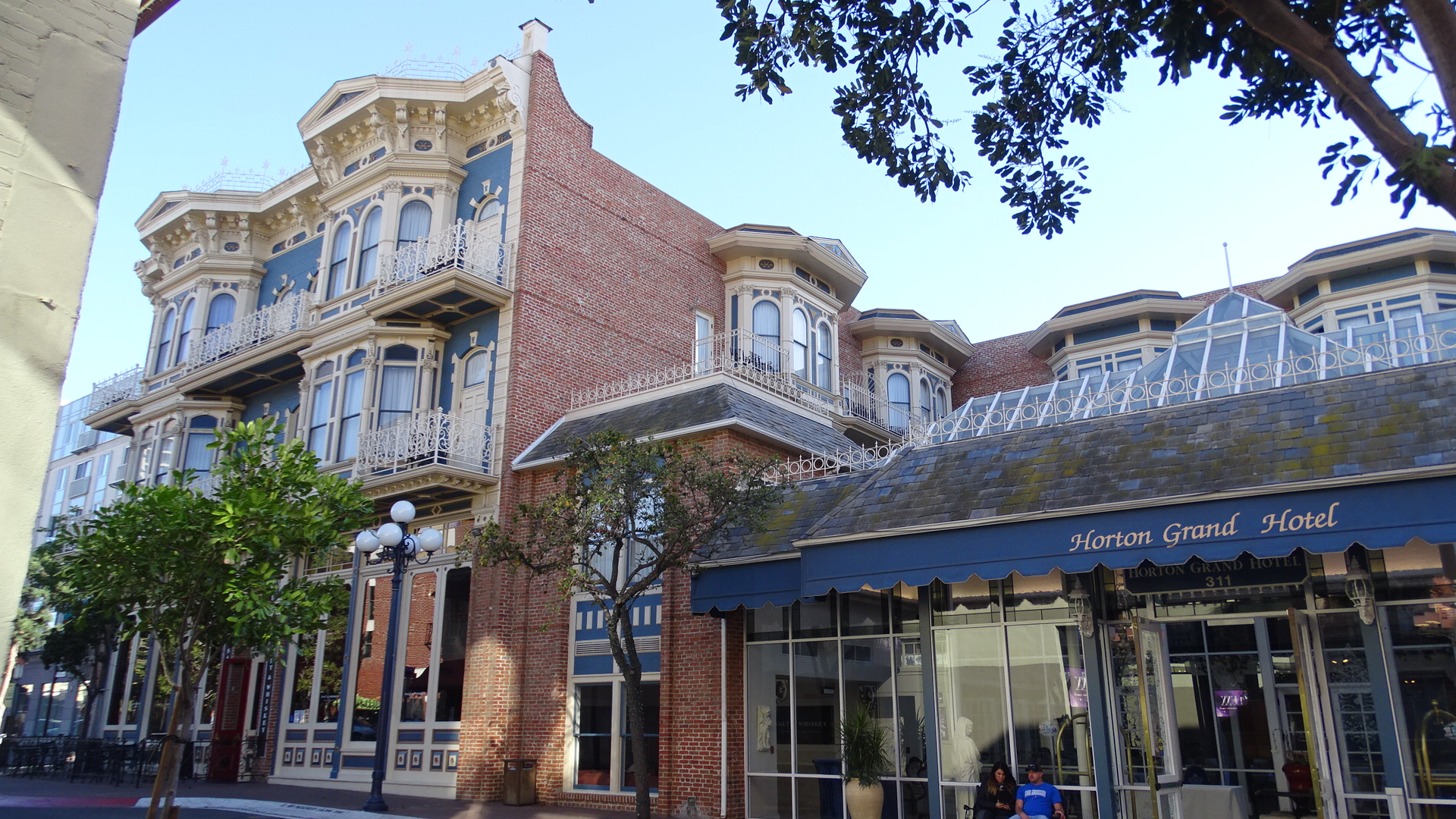 Opened in 1886, the Grand Horton Hotel was an elegant, ornate Italianate Victorian structure built by German immigrant Peter Mayerhofer in his desire to replicate the Innsbruck Hotel in Austria.

Opened in 1886, the Grand Horton Hotel was an elegant, ornate Italianate Victorian structure built by German immigrant Peter Mayerhofer in his desire to replicate the Innsbruck Hotel in Austria.

It was constructed by prominent San Diego architects Comstock and Trotsche.

The Hotel was one of 300 structures built during the Boom of the 1880s to accommodate the influx of people to the little seacoast town of 5,000. Over, 26,000 visitors flocked to the town after the arrival of San Diego's first transcontinental railroad in 1885.

Memories of guests like Kalakua, King of Hawaii; and Benjamin Harrison, President of the United States. Hollywood royalty like George Raft and Lou Costello; Wyatt Earp, his eyes cold as the glint of gunmetal; sports heroes like Jack Dempsey, Joe Louis, and the beloved Babe Ruth who raised the home run to an art form.

Read more about the history of this hotel on their website, the link is in the source of this post.

Roger Whitaker - There are two stories which explain why the ghost of this man haunts the hotel, especially room 309 and its hallway.

One theory says he died much earlier in 1843, long before any hotels were built. The father of the love of his life, his would-be bride, shot Roger and killed him. His body was dumped in a swamp located somewhere on what would be Ida Bailey's property, near where the current hotel stands. Spirits often haunt the land, and when this glorious hotel was built, guess who decided on moving in, choosing Room 309?

Another theory tells the sad tale of a gambler down on his luck caught cheating in a game of cards in a gambling joint located in the Stingaree District. He barely escaped certain bodily harm and ran back to his hotel, hiding in the armoire. Unfortunately, he was shot through the door and died in his room 309. He simply moved with the elements of room 309 to the new building. Or, perhaps his body was taken from the hotel and dumped in the swamp mentioned above and he simply moved back to his old room when the hotel he died in was reconstructed on the same property.

However he died or however he got inside the hotel, the spirit of Roger Whitaker haunts room 309 and the hallway where one finds the room. He isn't nasty like another ghostly gambler haunting the St. James Hotel, but does let the living know he is present and has appeared.

Roger Whitaker has made numerous appearances. One guest saw him in the hallway, and he looked so real, she asked him where the ice machine was located. Imagine her surprise when he disappeared before her eyes.

Room 309 - Guests have been awakened in Room 309 in the middle of the night by the bed being shaken and the armoire's doors being opened. Lights have been known to have a will of their own, turning on and off. Objects have been known to move by themselves. The temperature in the room becomes unexplainably warm, unaffected by the air conditioning or opening a window. Sounds of someone playing cards can be heard when the room is locked and vacant. An indentation of a form can be seen on the bed, sometimes just after the maids make the bed.

Several ghosts are known to graciously haunt the Horton Grand, who are polite and friendly to the living. Often when a building is renovated, ghosts and spirits who know the place often take up residence as it is in this case.

Madam Ida Bailey - Some think it is her spirit that makes visitors welcome. This grand hotel was built on the same site as her long-ago brothel. She must have been thrilled to have such a beautiful, grand, classy place built on her property!

The grand staircase - One evening, a visitor witnessed a group of spirits dressed in formal 1880s attire floating down the staircase together.