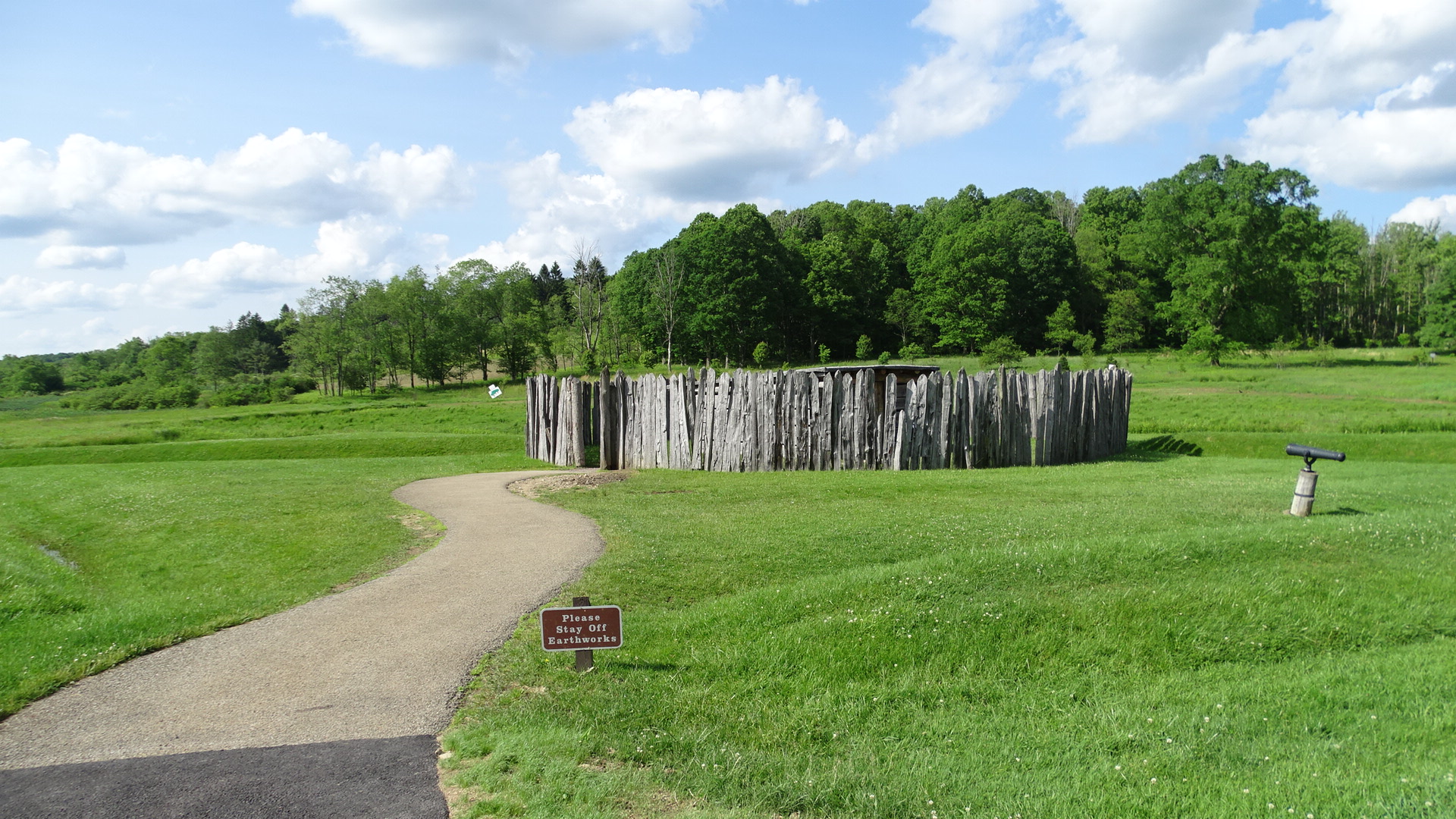 The battle at Fort Necessity in the summer of 1754 was the opening action of the French and Indian War. This war was a clash of British, French and American Indian cultures. It ended with the removal of French power from North America. The stage was set f

Fort Necessity National Battlefield is a National Battlefield Site in Fayette County, Pennsylvania, United States, which preserves the site of the Battle of Fort Necessity. The battle, which took place on July 3, 1754, was an early battle of the French and Indian War, and resulted in the surrender of British colonial forces under Colonel George Washington, to the French and Indians, under Louis Coulon de Villiers.

The site also includes the Mount Washington Tavern, once one of the inns along the National Road, and in two separate units the grave of British General Edward Braddock, killed in 1755, and the site of the Battle of Jumonville Glen.

After returning to the great meadows in northwestern Virginia, and what is now Fayette County, Pennsylvania, George Washington decided it prudent to reinforce his position. Supposedly named by Washington as Fort Necessity or Fort of Necessity, the structure protected a storehouse for supplies such as gunpowder, rum, and flour. The crude palisade they erected was built more to defend supplies in the fort's storehouse from Washington's own men, whom he described as "loose and idle", than as a planned defense against a hostile enemy. The sutler of Washington's force was John Fraser, who earlier had been second-in-command at Fort Prince George. Later he served as Chief Scout to General Edward Braddock and then Chief Teamster to the Forbes Expedition.

By June 13, 1754, Washington had under his command 295 colonials and the nominal command of 100 additional regular British army troops from South Carolina. Washington spent the remainder of June 1754 extending the wilderness road further west and down the western slopes of the Allegheny range into the valley of the Monongahela River. He wanted to create a river crossing point roughly 41 mi (66 km) away, near Redstone Creek and Redstone Old Fort.

This was a prehistoric Native American earthwork mound on a bluff overlooking the river crossing. The aboriginal mound structure may have once been part of a fortification. Five years later in the war, Fort Burd was constructed at Redstone Old Fort. The area eventually became the site of Nemacolin Castle and Brownsville, Pennsylvania - an important western jumping-off point for travelers crossing the Alleghenies in the late 18th and early 19th centuries.

To reach the Ohio River basins' navigable waters as soon as possible on the Monongahela River, Washington chose to follow Nemacolin's Trail, a Native American trail which had been somewhat improved by colonists, with Nemacolin's help. He preferred this to following the ridge-hopping, high-altitude path traversed by the western part of the route that was later chosen for Braddock's Road. It jogged to the north near the fort and passed over another notch near Confluence, Pennsylvania into the valley and drainage basin of the Youghiogheny River. The Redstone destination at the terminus of Nemacolin's Trail was a natural choice for an advanced base. The location was one of the few known good crossing points where both sides of the wide deep river had low accessible banks; steep sides were characteristic of the Monongahela River valley.

Late in the day on July 3, Washington did not know the French situation. Believing his situation was impossible, he accepted surrender terms which allowed the peaceful withdrawal of his forces, which he completed on July 4, 1754. The French subsequently occupied the fort and then burned it. Washington did not speak French, and stated later that if he had known that he was confessing to the "assassination" of Joseph Coulon de Jumonville, he would not have signed the surrender document.

Reports continue to come in of paranormal occurrences including the sound of ghostly musket shots and voices giving commands to unseen ghostly troops. Many have heard ghost whispers in an Indian, British or French tongue.

Fort Necessity National Battlefield Park is located off the National Road, US 40, in Farmington, Pennsylvania.

The battle at Fort Necessity in July of 1754 was the first major battle of the French and Indian War. For more information about the battle, see the official Fort Necessity National Battlefield website.

Legend has it that Fort Necessity is haunted. Park rangers and visitors have heard muskets firing, as well as unexplained footsteps in the visitor center.

A variety of talks, tours, and demonstrations are available in the summer. Get a complete schedule of daily activities at the visitor center. Follow the short paved path from the visitor center to the Great Meadow and Fort Necessity, where the French & Indian War began. Plan 1 1/2 - 2 hours to see the historic sites in the main unit of the park. Add an hour to visit Braddock's grave and Jumonville Glen.